Skip to content
Posted on December 23, 2006 by Cos Posted in General

Halloween writer/director Rob Zombie has announced on his official Blog that he has cast Malcolm McDowell as Dr. Loomis in his new take on the classic horror movie.

Dimension Films has scheduled an August 31 release for the film.

Here is a picture of Malcolm McDowell:

He’s been in a few sci-fi movies, most notoriously in Star Trek: Generations as the one villian to kill Captain Kirk. He was also in A Clockwork Orange (which I have yet to see, but would love too).

Interesting choice for Dr. Loomis, he looks nothing like Donald Pleasance, but seeing that its supposed to be Rob Zombie’s version of Halloween (much like how Tim Burton did Planet of the Apes, he called it a re-imagination, not a remake–which makes no sense since any remake is really a re-imagination of the original work…except for Pycho, which was literally the same exact movie just shot with different actors and in color…but I digress), so I’m up for whatever he throws at us.

PS I always wondered why Rob Zombie Looks so familiar too me and why I always think he’s a wrestler, he reminds me of Raven…check them out:

Also, in this pic, Zombie looks like The Undertaker…check out their pics: 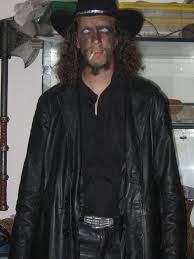 One thought on “Zombie Casts Dr. Loomis in Halloween”